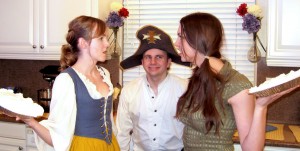 Kimberly Leemans, Nicholas James and Heidi Schooler among the new cast in the second season of ‘the cooking show with a complex’

“I actually went to boarding school in Waterloo, Belgium, so I already felt like I had a ‘history’ with Napoleon,” said Leemans, who will be portraying Napoleon’s mistress, Eléonore Denuelle.

“It’s good to see Napoleon finally meet his match,” Moore said. “Louisette Caro knows how to keep him in line.”

“Napoleon Bon Appétit” was written by Houck. Browning serves as the producer, along with David Walters. All episodes were directed by the Accolade award-winning Mike Campbell. The series is from Black Falcon Productions and Mahatma Dragon Productions in association with Three Roses Entertainment.

“Napoleon Bon Appétit” will be conquering a new recipe every two weeks on Somebody’s Basement and www.NapoleonBonAppetit.com.