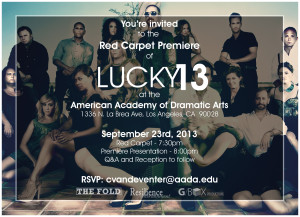 The American Academy of Dramatic Arts is hosting the premiere for “Lucky 13” on Monday, September 23rd. Arrivals on the red carpet will begin at 7:30pm, followed at 8pm by the premiere with a Q&A and reception afterward.

“Lucky 13” tells the story of the trials, tribulations, and life lessons of eight strangers who all make their way to Los Angeles to pursue their dreams of “making” it in Hollywood. Although they are from varied places and backgrounds, these actors find themselves thrown together and are forced to learn that they have more in common than they think. The bonds formed through their hopeful, victorious, and sometimes tragic experiences prove to be life-long. As they embark on the up-hill climb of pursuing their passions, they realize that in order to grow as an artist… they must first grow as individuals.

I have the unique distinction of playing a fictionalized version of myself in the series, as it is inspired by the real-life events of my section at AADA ten years ago. My character is called Jeffery. He’s an odd man from the Midwest who shows up for the first day of class wearing a cowboy hat and a Garth Brooks t-shirt. If you ever want to see the most unflattering reflection of yourself, read someone else’s depiction of you in a script. 😉

The premiere will be held at The American Academy of Dramatic Arts in Hollywood, located at 1336 N La Brea Ave, Los Angeles, CA 90028.

I hope to see you there!