Derek on the cover of “La Libertad” 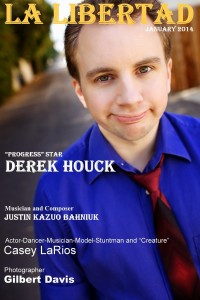 Derek Houck is the cover model and featured interview in the January issue of La Libertad. Derek talks about working on the IAWTV-nominated web series Progress in a wide-ranging discussion that covers his career and personal life. From the interview:

WMV: What advice, if any, would you give others who are also trying to “make it” in the entertainment industry?

Derek: Focus on building a career, not on landing a particular job. Help others out when you can, and they’ll do the same for you. The only reason I knew about “Progress” is because I did a children’s show with the producer, Nicole Wright, years earlier. I plan to be acting when I’m seventy, and I want to be able to turn to my co-star and say, “Remember that student film we did together back in ’07? Before the clone wars and drone pizza delivery? Ah, those were the days.”

Be sure to read the full interview where Derek discusses a wide variety of subjects, including the creation of Napoleon Bon Appétit, which Kansas City is the REAL Kansas City, and why the Love That Girl! premiere party was called a “meet and tweet.”